I like to tinker around with technology. I think that much will be evident from my website and the type of posts that I write here. Sometime back, I was trying to play around with a Raspberry Pi. It was a RPi zero so it didn't have a lot of capabilities, but I figured out that I could run Raspbian Buster or Debian Buster on it and also ran this website on it till recently when I migrated it to AWS. While playing around with RPi zero, I discovered and created a bootable usb drive on Mac using diskutil and dd. The same process also work for creating a bootable SD card.

For quite some time now, I have been using a MacBook as my primary computer and while it is a great machine for personal productivity and development, I didn't really dive deep on system administration. I needed to figure out how to format a USB drive and a SD card on Mac and write a bootable image on it.

I did a lot of research and I came across a site from a Microsoft engineer who had written a very nice article on this and I used that article to very easily achieve my task. But I can't find that anymore so instead of relying on someone else, I thought I will document it myself and also add some additional details so that others can benefit. I could have very easily used my Windows computer but that wouldn't be integral with my tinkerer nature.

Recently, I had revived an old 2009 laptop which refused to run any of newer OSes so I did another research on possible OSes that could run on it and figured that I could run Lubuntu on it easily. So I went ahead and downloaded the latest version of Lubuntu - Focal Fossa and set to the task of creating a bootable USB drive.

To achieve this, I need only two tools from my MacBook

Let's take a look at the details now.

The first thing that needs to be done is to determine the device details of the USB drive. To do that, first insert the drive in your USB port and run the command below: 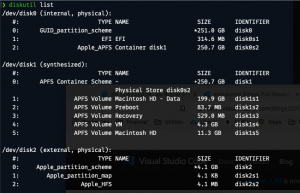 This command will show an output of the disks mounted. Determine the device details by looking at the disk size and note down the device details which will be in the form /dev/diskN where N is a number. Once the device number is determined, run the following command under root (sudo) privileges

Make sure to replace the LABEL with the name you want and N with the number noted above.

It will take a few minutes to complete the process and once it is complete, run the following command:

Again taking care to replace N with the appropriate number.

Once the disk is unmounted, we are now ready to write the bootable image to the USB drive. To do so, run the following command:

Depending on the size of the image, this can take several minutes. You can check the progress of the process by pressing Ctrl+T on the screen. Once finished, run the following command to eject the disk from the computer gracefully.

Don't forget to replace the N!

Now that you understand the commands, let's take a detailed look at the verbs and the switches we used in the commands.

That's it for now. I hope this short tutorial has been helpful to you. Instead of using the GUI tools, I have found that using these command line utilities provide a lot of flexibility and power to the system administrator but can be confusing at times and have potential to destroy data if used incorrectly.